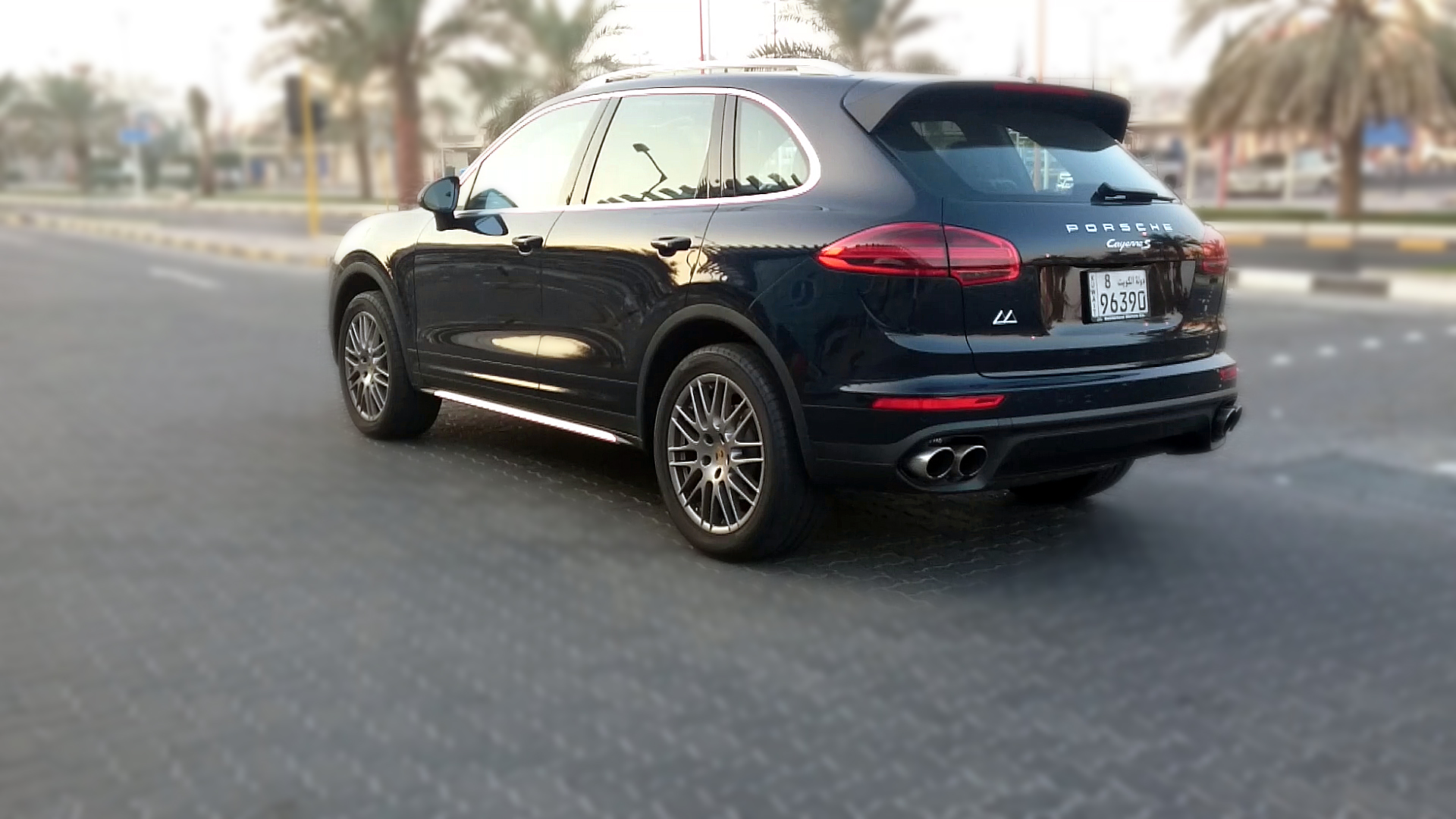 Hello. Today we will be reviewing the Cayenne S 2015.

The current Cayenne took a whole new look and design since its 2011 model. Usually cars take small changes to their original design in the middle of its lifecycle to maintain the sales rate. It takes around 7 to 8 years for cars to acquire a complete new design. The 2015 Porsche Cayenne S got what they call a “Face Lift”

Exterior changes included the front bumper, front lights with the signals and a bigger hood. The back of the car also took a few changes to the bumper. The back lights also had a small change but they remain LED.

You can watch the Porsche Cayenne GTS review here

The Cayenne S now comes with exhaust that has 4 pipes. It now take the shape and look of the sports exhaust, but they are not sport. If you were to customize your car with a sports exhaust, you will have the option of a black or silver color.

Design changes also included the rear spoiler and the top brake lights. The side mirrors now include light signals.

The trunk door of the 2015 model witnessed an elimination of a small part that was available in the old models. This part makes it look like there are two openings in the trunk. It’s more visible on light colored cars and takes a resemblance to the trunk doors of the BMW X5 and range Rover cars.

The most important change to the interior of the Cayenne S is the steering wheel. It now resembles the one in the Macan S and the 918. It now has the luxurious Porsche look. Easier control of the shift gear where up shifting on the right and down shifting on the left, like most other cars. Unlike the previous version where full control can be done on either the right or the left side, which was a bit complicated to use.

The other change made was to the middle console. This change will only be noticeable to previous Cayenne Owners. Which is the elimination of the button that opens the lock of the car doors, as it is already installed on each door. They put the HDC from the sport exhaust button to replace the lock button.

Now we come to the most important change to the Cayenne S. We know that the Panamera has experience a change to its engine last year. The same engine change is now done to the Cayenne. The Cayenne turbo is the only one comes with 8 cylinder, the same goes most likely to the Turbo S as well. More horse power to the Engine.

Why is Porsche Cayenne so Expensive

The Cayenne S and GTS engines are 6 cylinder Twin Turbo. Horse power in the Cayenne S used to be 400. Now it’s 420. Torque used to be 500 now its 550. The new 3.6 engine is the same as the V6 engine on the Panamera except with the Panamera it comes without the twin turbo. It’s also the same as the engine of the Macan Turbo. Although it only reaches 400 with the Macan Turbo.

The horse power on the Macan S is 340, while it reaches above 400 on the Panamera.

It’s becoming kind of confusing trying to understand how the engines work in the Porsche brand.

The torque in this new engine is constant at 550nm after the 2000RPM, so when you press the pedal you will notice sudden jump then a constant acceleration to the red line. You will miss the gradual acceleration we feel with the naturally aspirated engines, even did not feel the same acceleration on the Macan S while it has 340 hp

The car seems heavier with a weight of around 2,100 KG with the basic features. Customizations that could add to the weight of the car include the installment of the panoramic sun roof, leather seats, and sound system and so on. The customizations could make the car’s weight reach around 2,400 to 2,500 KG.

Now we will review the new features added to the Cayenne 2015 model.

The “soft close” feature was applied to the doors.

4 cameras were installed, on the back, the front, and the side mirrors of the car. However, this new addition will not come in the first batch. They will be available in the batch production in the year 2015.

New feature was introduced in the 2015 model related to the engine and gear, they call it Coasting Technology. When you are driving with constant speed and you removed your right foot from the pedal, the engine will decelerate and the gear will down shift, what we call it engine braking. This new coasting will eliminate this braking by disconnecting the gear from the engine so the car will not decelerate.

The Cayenne is the only Porsche with 8 speed gear not PDK, I tried it in all modes and never felt difference with the PDK in the Macan S.

The Cayenne is the true German car that combines sport and real off-roading in one car, it is not an AWD like the one in the BMW X5. It has real switch for low and high off-road and technologies to make it serious off-road warrior. Also you will notice the Cayenne passing the 1st gear, which is usually used for off-road or towing since it is capable of 3500kg trailer, unless you put it in sport

You can watch the BMW X6 Xdrive50i review here

The brakes in the Cayenne like any other Porsche model, they will get bigger whenever you go up a level in the car. In the Cayenne S, the front brakes size is 360 and the back is 330. All Cayenne models has front 6 pistons and 4 in the rear, this feature is only available in the serious sport cars like the Carrera Turbo S, Panamera Turbo S and the GT3, 3 pistons in each side of the front rotors to make sure you have the best brakes in the sport car segment

The back seats are very roomy with full control of seat (front\backward and back angle adjustment). Very spacious comfortable leg room, feels like the 750iL.

The Cayenne S is perfect for a small family of 2 children and a nanny. For single men I would go for the Macan instead. It’s very sporty, fast, and practical, for an SUV car, and it costs less.

If you have a bigger family like 3 children plus a nanny, the Cayenne may not be a good option for you. There won’t be enough room to install child seats. A better option might be the BMW X5 or Land Rover LR4.

The steering wheel definitely feels smoother. It may have the steering plus feature where the steering wheel gets heavier and less sensitive with high speed for better control of the car and vice versa when in low speed for maneuvering with less efforts. After checking the option list I found the Cayenne S come with Aluminum front axle which is lighter and changed a lot the feeling. Honestly, I liked this change in the steering over the heavy one in the standard Cayenne that needs more efforts and less street connectivity as well might not be liked by ladies who need light steering.

Another costly feature that I really recommend is the damping suspension that give comfort, sport and sport plus. The standard suspension is hard so it feels really sporty but that might not be good when you have family or ladies driving the car. With this option, the car very comfortable in comfort mode and hard in the sport plus as a sport car. If you ordered this option I also recommend the sport Chrono package plus that has a small race look timer and also applies a lot of changes on the car control in the sport plus mode.

PDCC feature keeps the car balanced on the road whatever your speed is. However this option is a bit costly, I don’t recommended since the Cayenne never feels rolling easily unless you have the GTS or Turbo model and you are a serious driver using the car on track circuit.

Cayenne is known to be a very stable car at high speeds. The performance is always optimum regardless of the model or how many persons and luggage inside. I call it the Beast. Perfect for travelling also.

I am a big fan of the BMW X6 and I drove it in the race circuit, it is unbelievably fast and stable but it lacks a lot of usability features like the off-road capability, rear seat space, luggage space and rear view.

They reprogrammed the auto hold feature that prevent the car from rolling back to be active as well when the car willing to go forward while you are pressing the brakes which is a nice addition.

Four climate zone is another nice feature to have with your family featuring separate temp and fan speeds.

They added the turbo wheels we saw in the Macan S to the Cayenne options, the 20” RS wheels available in this car has 275 tires in all corners, they will jump to 295 in the 21” which I really don’t recommend. The 21” looks wider than tires and will be scratched easily and they have low profile tires that will be damages easily under the heavy weight of the car.

Ending our drive test today, this is not huge change, it is jusy small touches like reassigning the side signals to be in the side mirrors. If I have the 2012 or 2013 should I upgrade to this new model, definitely not. This model will be available till 2017-18

Competitors are very limited, BMW X5, X6, Mercedes ML, range rover sport, but it is the only one combining sporty and true off-road together. It is true the range rover sport is a serious off-roader but never matches the sport feeling of the Cayenne.

Should I buy the BMW X5, X6 or Cayenne? They are all sporty, practical but the Porsche is a higher level however I am a big fan of the BMW cars. They really the ultimate driving machines but they are after the Porsche cars. Owning Porsche is costly so you would expect paying for the major service around 20-30k Saudi Riyals (1.5-2k KD). The demo car price is 31k KD = 400k SAR.

I have notice the oil temp around 100-110 in this model but usually Porsche cars they perform very well when they are running hot.

I have notice the auto start stop needs optimization since they work just before you do complete stop.

Also the Coasting technology behavior is jerky during the low speeds when you remove your foot from the pedal shortly and suddenly you would like to pass another car, you will feel the sudden connection between the gear and the engine.

I wished they installed rear lights inspired from the ones in the Macan, they jusy look normal.

The engine of this car will go up to 140km/h below 2000RPM which will save fuel, thanks to the 8 speed gear. But below the 2000 RPM the car just feels like a normal V6 without a turbo

I would like to give big thanks to Porsche Kuwait Center marketing dept for giving me the prevelage to be one of the 1st driving this master piece.

If you have any questions or concerns please feel free to contact me. Thanks all and see you in anoher sport car.